My friend Richard and I recently picked up a half ton of beautifully ripe Syrah from Ruben Balderas at Black Ridge Vineyards in Los Gatos. Ruben’s crew met me at the vineyard at 7 AM to harvest the grapes in the cool morning air.

Black Ridge sits at an elevation of about 1,000 feet and overlooks Lexington Reservoir and downtown San Jose. 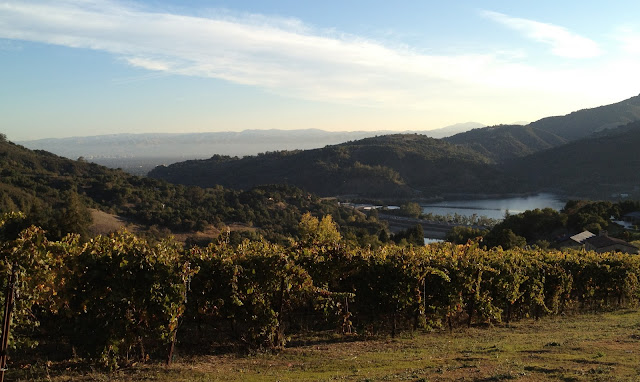 With rains in September, botrytis mold has been a huge issue in most California vineyards this year.  Fortunately, October was dry and warm and I was able to locate an area of the vineyard with very little botrytis. The block that I selected was also very dry. There were no green leaves remaining and the stems were turning brown.  The grapes looked great, with very little desiccation, and were full of dark, concentrated flavor with a bit of spice. 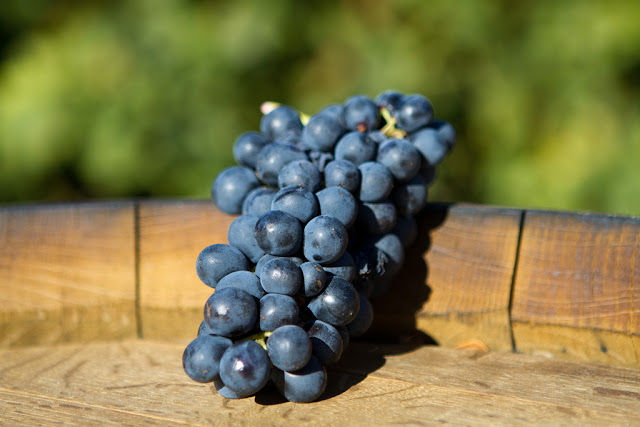 I sorted out leaves and unworthy bunches as the crew dumped their buckets of fruit into the bin. It took less than an hour to fill the bin and get it loaded onto my truck. 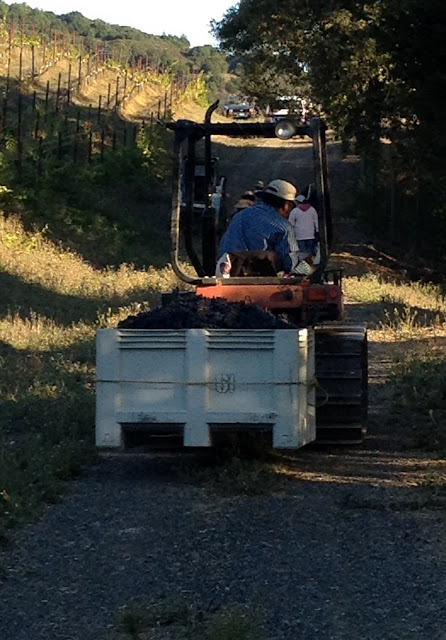 I make my wine at the old Cinnabar winery (now called Domaine Eden and owned by Mount Eden Vineyards) off of Highway 9 in Saratoga. On the long drive up the 2 mile mountain road to the winery, Richard and I discussed some different crush options.  As a hands-on maker of small lots of wine, I like to experiment with new and different winemaking techniques when the opportunities arise.
Whole cluster or whole bunch fermentation is a traditional method where the fruit is not destemmed prior to fermentation. Traditionally, a whole cluster must is prepared by stomping (think — I Love Lucy in Italy).  The method is most often used with Pinot Noir and is virtually never used with Cabernet Sauvignon, as the stems would accentuate the green flavors often associated with that varietal. Whole cluster is not typical with Syrah, but I have seen some interesting examples such as the Scholium Project’s Androkteinos.
Since the greenness of the Black Ridge Syrah stems was drying and turning to a woody flavor, we decided on a whole cluster fermentation. If the stems are green, they can impart harsh tannins and green or herbaceous flavors.
When we arrived at the winery, it so happened that Mount Eden’s owner and Winemaker Jeffrey Patterson was there preparing for a Cabernet Sauvignon crush later in the day. I bounced the whole cluster fermentation idea off Jeffrey and his eyes lit right up. He has had great success with whole cluster fermentations on his Pinot Noir. He gave us some advice on how to crush the grapes and some pointers on what to look for during fermentation, including higher than normal pH and a longer fermentation time. 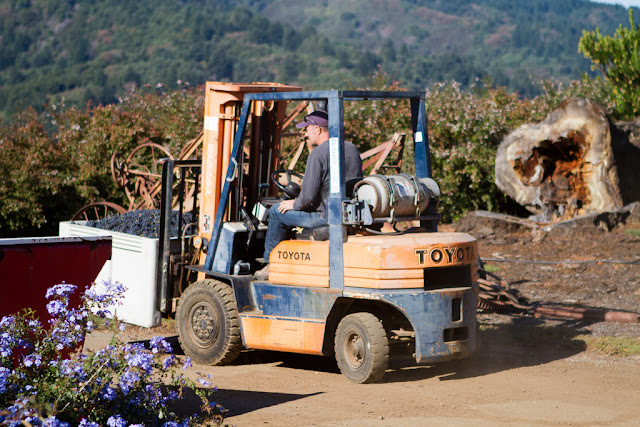 I moved the fruit into place so that Richard and I could sort it into two bins to make the foot stomping easier. 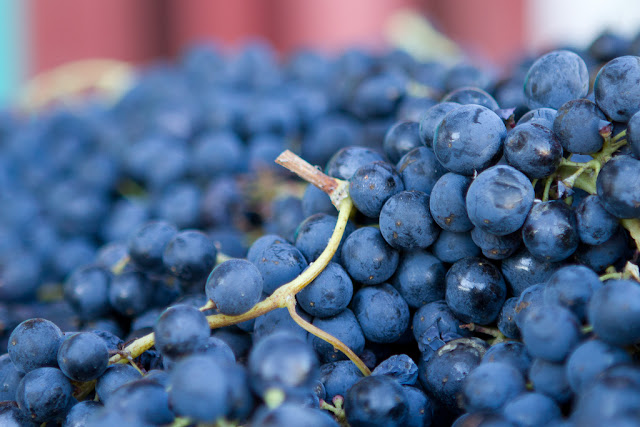 You can see above how the end of the stem, where it was cut, has browned.  These dried and woody stems can contribute complex character to a whole cluster fermented wine that has aged well. Velvety soft mid-palate tannins and earthy, forest floor notes are often attributed to the whole cluster fermentation method.  Much of the fun is to see how the wine develops. 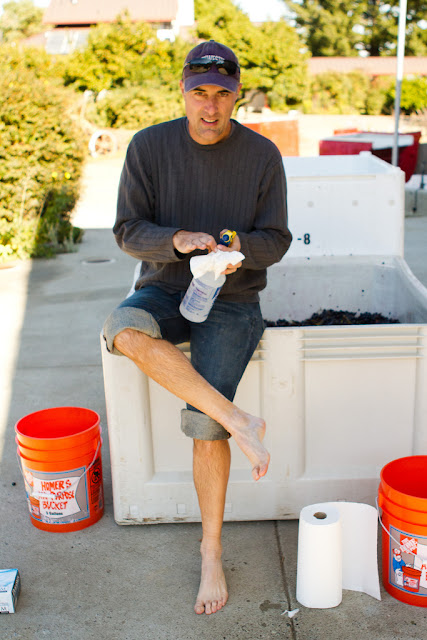 We had planned to put down a layer of fruit, cover it with plastic, and get into the bin to stomp with our boots.  Jeffrey scoffed at this approach and convinced us to “do it the right way”.  So we did!  We rolled up our pants, washed our feet with a vodka spray and hopped in.  The truth is, grapes right from the field aren’t the most sterile thing to begin with…. leaves, bugs, spiders, molds, bird happenings…. are in the initial grape must of every wine made.  Clean feet are surly not going to make the must any dirtier and the finished wine has 14% alcohol and has been clarified many times before it reaches the bottle. 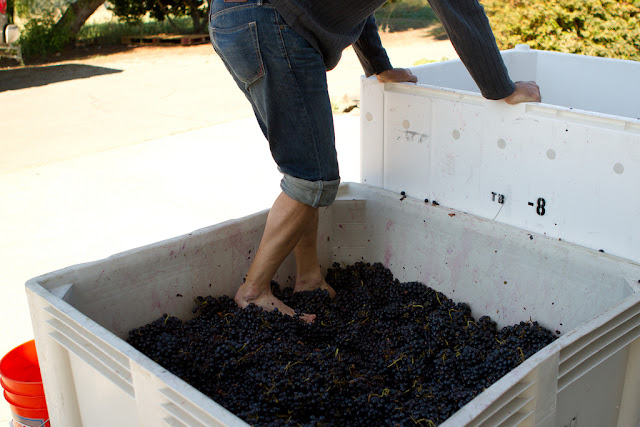 After sorting and dividing the the grapes into two bins and washing down with vodka, I hopped in to begin the crush.  At first, the stems on my bare feet were a bit painful.  But after a few minutes, I couldn’t much feel my feet anymore in the early morning harvested, 56 degree grapes. We sloshed and stomped for about 20 minutes and the crush was complete.
You’ve got to play the video to get a full appreciation for the crush.  It’s definitely a sloppy event. 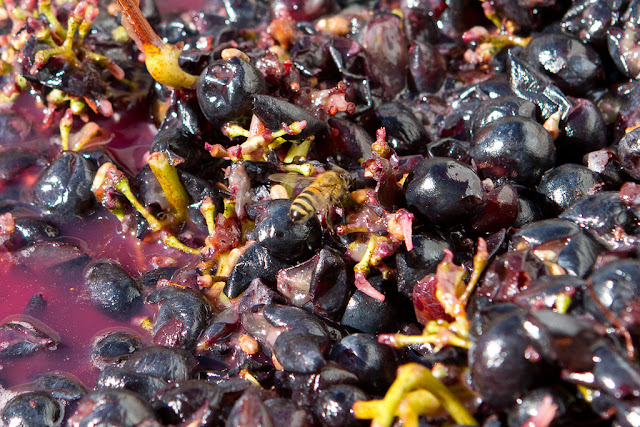 As the must developed under foot and sugar was released, the bees arrived to feast.  Most berries were removed from the stems and I would say about half of the berries were actually broken.  After a three day cold-soak, the juice was dark and intensely rich in flavor as compared to the Syrah we processed using a crusher/destemmer a few days before. This will be a different wine.
What a perfect day for me!  To take ripe fruit from the earth and work with it in a new and different way and begin crafting a small lot of wine with the potential to please, inspire, and surprise.  A dud or wine nirvana… only time (and careful attention over the next two or more years in barrel) will tell.